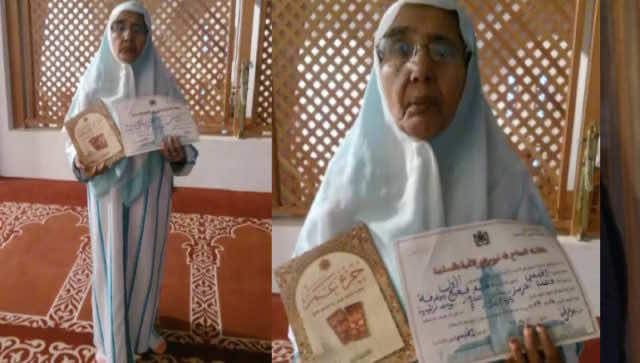 The success story of Fatimah Ouaziz, who decided to enter elementary school in her 80s, shows that providing women with equal and fair access to education will allow Morocco to further its commitments to human rights and economic development.

“Fatimah is one of our most inspiring students,” explains her instructor. “Although it took her three years to pass grade one, her attendance record was stellar, her hard work was unparalleled, and her accomplishment well-earned.”

Born in the tiny town of Tazoughart in the Middle Atlas of Morocco, Fatimah Ouaziz suffered through the famine provoked by the secular French occupiers during the French “Protectorate.”

From an Amazigh family, she grew up speaking Tamazight. Like most Moroccans of the time, the lively little girl was deprived of even a basic education.

Since the traditional Islamic school system was dismantled by the French, and mosques could no longer operate as a medium of literacy teaching, Fatimah, like millions of others, became part of a lost generation that mastered neither French nor Classical Arabic. While Moroccans could speak Berber languages and Darija, the Moroccan Colloquial Arabic dialect, they could neither read nor write them.

Like most Moroccan girls in the mid-half of the 20th century, Fatimah was married in her early teens to a man nearly ten years older, named Moha Bejja, who was already twice divorced. Fortunately for her, he was found to be a kind, caring, and compassionate man who abhorred misogyny. As a traditional Middle Atlas Berber, he had never absorbed Arabic cultural influences in matters of gender relations. He was more matriarchal than he was patriarchal.

Fatimah raised a family of eight in both Beni Tedjit and Bouarfa. After her husband passed away in 2007, and she completed two pilgrimages to Mecca, she became determined to acquire literacy. “Teach me to read,” she would ask family members, who brushed her off with a smirk or a shake of the head, thinking she was far too old to learn to read in her seventies. After all, she had never completed any studies in her life. A mind is like a muscle, the family figured, it atrophies if it remains unused. Like the proverbial Little Train, Fatimah persisted: “I think I can, I think I can, I think I can.” And she clearly could. Where there is a will, there is certainly a way.

As if her prayers were answered, the Kingdom of Morocco instituted a series of important reforms over the past few years. In response to the rise of intolerance, King Mohammed VI, who holds the official title of “Leader of the Believers,” hosted a gathering of hundreds of religious scholars that resulted in the Marrakesh Declaration, a reaffirmation of the rights of religious minorities in Muslim-majority countries.

In response to the rise of extremism and fundamentalism, a phenomenon that is inextricably linked to misogynistic misinterpretations of religion, the King of Morocco set into motion plans to place women imams in all mosques. If gender relations were imbalanced, with men dominating Islamic discourse, the presence of educated and empowered women would help bring matters back into balance.

Unlike other Muslim-majority countries where women are discouraged or prohibited from entering mosques for prayer, Moroccan mosques have always been open to women. Their sections, however, have been substandard and most attendees have always been men. Since women play such an important role in the education of children and the transmission of faith, the Kingdom of Morocco determined that it was imperative for women to acquire a better understanding of Islam to protect and reassert their God-given rights.

Permitting women to attend mosques is nothing new. As the Prophet Muhammad himself commanded, “Do not prevent the female servants of Allah from attending the mosque” (cited by Abu Dawud and Muslim). In Malaysia, Vietnam, Thailand, and Indonesia, women are provided prayer sections that are as large as those provided to men.

Rather than be relegated to the back of the building, Muslim women in south-east Asia are often given a vast balcony providing them with a panoramic view of the mosque. In other cases, the mosques are split down the middle, with a simple line or a modest, symbolic barrier, distinguishing between the women’s side and the men’s side. The mosques are in gender harmony: half for women and half for men, standing side by side in equal sections, without either feeling like second-class citizens.

The desire of the Moroccan Kingdom to open mosques to women also has important economic implications. As empirical evidence indicates, the development of nations is directly related to the education of its women. When women are illiterate, countries are chronically underdeveloped. When women are literate, countries are developed. To educate and empower women is the path to progress.

No longer limited to places of prostration, opened only during prayer time, and closed immediately thereafter, mosques in Morocco have been given a new life, meaning, and purpose. Many of them are now operating as schools, as they did during the Golden Age of Islam, not only for children, but for adults as well, and not only for boys and men, but for girls and women as well.

Every day for three years, Fatimah would rise early in the morning, shower, get dried, get dressed, eat breakfast, pack her schoolbag, and head off to school at the local mosque. There, women teachers, the new female imams hired by the Kingdom of Morocco, would teach the pupils, senior citizens in this case, how to read, write, count, and do basic math.

The curriculum is grade one: all the same subjects as taken by six- and seven-year-old children in elementary school. Some of the senior citizen students struggle. Some succeed. And some fail. In Fatimah’s case, she was forced to repeat grade one a full three times. The third time, however, was a charm and Lala Fatimah Ouaziz Bejja passed with honors. “God commanded us to read,” explains this sweet sharifah, “I heard and I obeyed.”

Fatimah had a dream. She pursued that dream. She persisted when everyone, even her family members and in-laws were convinced she could never learn to read and write due to her advanced age.

Forgive me, my beloved mother-in-law, forgive me for failing to teach you when you asked. I am so proud of you and so ashamed of myself. You had the strength to learn to read in your eighties while I was too weak to teach you in my forties.