Sunnis, Shia, Sufi express ‘great satisfaction’ and hope that the Document on Human Fraternity constitutes a new phase in relations between Christianity and Islam 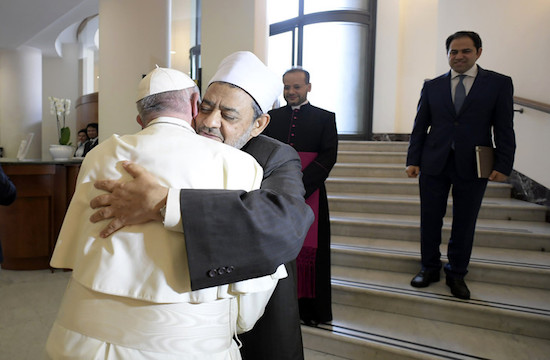 The Document on Human Fraternity signed on Feb. 4 by Pope Francis and Sheikh Ahmed al-Tayyeb, Grand Imam of the Al-Azhar , during the pope’s trip to the United Arab Emirates, has been hailed as “an unprecedented institutional event in the history of Christian-Muslim relations.”

In a text that runs to 15 pages and is entitled “The Brotherhood for Knowledge and Cooperation,” 22 Muslim intellectuals and leaders have welcomed it as a sign that “a new phase is opening up, in different aspects, in the relations between our two religions.”

“This phase seems to be moving toward the recognition of the providential legitimacy and diversity of Revelations, theologies, religions, languages and religious communities,” they write.

“Diversity is no longer seen as a call to conquest or proselytism, or a pretext for a simple facade of tolerance, but rather as an opportunity to exercise and put into practice the fraternity which is “a vocation contained in God’s plan for creation.”

Recognition of ‘the other’ is necessary

Consequently, and by “respect for religious plurality … recognition of the other is necessary,” the signatories also affirm.

It is an acknowledgement that is “neither a forced uniformity nor a conciliatory syncretism, but instead “a warning against the risk of placing one group against the other or in the other’s place.”

Among the signatories are several Sufi officials, including the Senegalese Sheikh Ahmed Tidiane Sy and the Italian Yahya Pallavicini, “one of the promoters of this initiative,” as claimed by one of his Italian relatives. There are also personalities who have long been involved in Islamic-Christian dialogue, such as the Algerian Mustafa Cherif and the Lebanese Mohammed Sammak.

They were joined by muftis from Bosnia and Slovenia, the Grand Imam of the Lahore Mosque in Pakistan, a member of Kaiciid, a Saudi organization engaged in interfaith dialogue and based in Vienna, Austria, as well as several representatives of Emirates organizations.

Published on a website created for the occasion, their text recalls from the Catholic point of view some of the stages of Islamic-Christian dialogue, such as the Second Vatican Council declaration Nostra aetate, the visit of John Paul II to Morocco and the meeting in Assisi in 1986.

“Since then, the idea began to emerge that the Christian concept of God, in its very essence, is not fundamentally contrary to the Islamic vision, although it is formally presented in a different way,” they write.

On the Muslim side, other initiatives were also mentioned, such as the document “A Common Word” written by 138 Muslim scholars in response to Benedict XVI’s remarks in Regensburg, and the launch by Saudi Arabia of the Kaiciid in Vienna in 2012.

“Interreligious dialogue is recommended by the Quran, which calls for its implementation ‘in the best way’ and nowadays it is vital,” say the authors, who warn against the temptation to “understand or practice” the values of “fraternity, mercy and spirituality … in an excessively sentimental or emotional way.”

But, for the most part, these Muslim leaders from various countries wish to express their “great satisfaction” and their hope that this text constitutes what they describe as “a starting point (as much as a point of no return).”

“We hope that, through this meeting and this document, the Muslim community around the world will find a new impetus and inspiration for internal dialogue, to make its natural “unity in diversity” a shared common value once again,” they said.